Is Camping in Bear Country Safe?

Many people are wondering if camping in bear country is safe or not. This text is aimed at answering this question so that everyone who could be potentially interested in backpacking and camping around bears will be able to make up their mind whether to go for a trip there or not. The short answer is… you’d hate the answer but… Well, it depends. Wait, wait, wait. Giving a definitive answer without discussing the subject would be at the very least foolish or totally irresponsible. We don’t want to do that. We don’t want to say something like:

“Yes, it’s totally safe, just go there do whatever you want to do and have fun. Don’t bother to learn more about bears and their behavior because it isn’t that important.” Or

“No, don’t go because there’s a huge chance that you’d be killed and eaten by a grizzly (or black, polar, etc.) bear.”

There’s a much better way to satisfy your curiosity and educate you about bears and the things you need to know regarding these fascinating animals. The plan is simple. There are a couple of points we need to clear up. We’ll answer a small number of closely related questions regarding bears and their expected behavior in certain situations. We’ll also discuss your best response to some precarious situations.

How to store food when camping in bear country?

Well, food should be stored, handled, and disposed of in a responsible manner so that it would not be accessible to bears. It’s really important because bears are curious and intelligent animals that aggressively seek food that’s easy to find and get. Keep in mind that they’d do anything to find improperly stored human foods and edible garbage (and they have an excellent sense of smell that we discuss below). For example, they can easily break into cabins and other places where foods are inadequately stored. This means that you should keep your supplies properly stored. Your food cache should be kept away from your camp, preferably in bear-proof equipment such as boxes, containers or hanging poles. Keep in mind that in some areas backpackers are required to have a bear canister or they risk being fined.

What is a bear vault and do I need one?

The BearVault is among the most popular manufacturers of bear-resistant food canisters. Their bear-proof containers (BearVault BV500 and BearVault BV450) are light, sturdy, easy to use, and are approved by all US national parks. 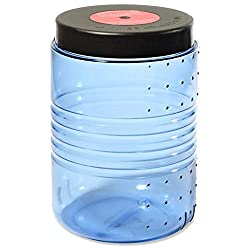 They also offer good volume for their weight and can fit enough food and necessities for a backpacking/camping trip. Moreover, BearVaults are clear so that you could see and grab the items you need.

Bear-proof containers offer a convenient and reliable way of storing food and leftovers. However, they can be vulnerable to failure in certain cases, especially due to a human error.

Can bears smell food in cars?

Yes, they can smell food no matter if it is stored in cars, trucks or RVs. The sense of smell of a bear is amazing – it is up to 2100 times better than human’s, 21 times better than dog’s and 7 times better than blood hound’s. That’s why you need to keep all attractants such as food, garbage, toiletries, etc. out of reach of bears. Actually, on their page about food storage in Yosemite, the National Park Service recommends to “store food inside your car or truck (out of sight, with windows completely closed) only during daylight hours.”

The keen sense of smell of bears makes them smell even sealed food located hundreds of meters away. That’s why you need to store all your food, leftovers, and garbage into your food cache and keep it hundreds of meters away from camp, preferably in a bear canister or in a place where it will be out of reach of bears. Remember that proper food storage is essential for safety when backpacking or camping in bear country.

Does cayenne pepper keep bears away?

“Yes” and “No”. It is “Yes” when you spray directly the bear with aerosols of painful cayenne pepper. This type of deterrent is a highly effective means of repelling curious or aggressive bears. Using a cayenne-pepper-based bear spray can definitely stop a bear intent upon attack and make it think twice about attacking/continuing its attack. The active ingredient in such types of bear sprays is capsaicin – a component of chili peppers. They use it for anti-mammal defense. Capsaicin causes a burning sensation when it comes in contact with any tissue. It’s particularly effective when you spray the bear (or another mammal) into their eyes producing pain and breathing difficulty. Note that highly motivated bears might need to being sprayed more than once to stop the behavior. 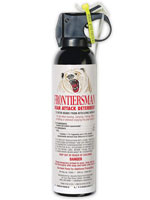 Interestingly, cayenne pepper is a powerful bear attractant so don’t do the mistake of spraying your equipment, tent or clothes. Used this way, cayenne pepper will do more harm than good because the bear spray works as a deterrent only when the bear receives it into its eyes. You should keep attractants away from bears, so use the pepper-based spray only against charging, curious and/or aggressive bears.

What time are bears most active?

Bears are most active at night (except for the wintertime usually between November and March when most bears hibernate in their denning sites) especially during early morning and late evening hours when they’re actively looking for food. Thus, night hikes in bear country aren’t recommended, especially for solo hikers. Caution is needed when backpacking in bear territory especially at night when the visibility is lower. In addition backpacking through dense bush or forest further increases the chance of close encounters with bears. Keep in mind that surprise encounters are one of the main reasons that lead to bear attacks as a defensive response. 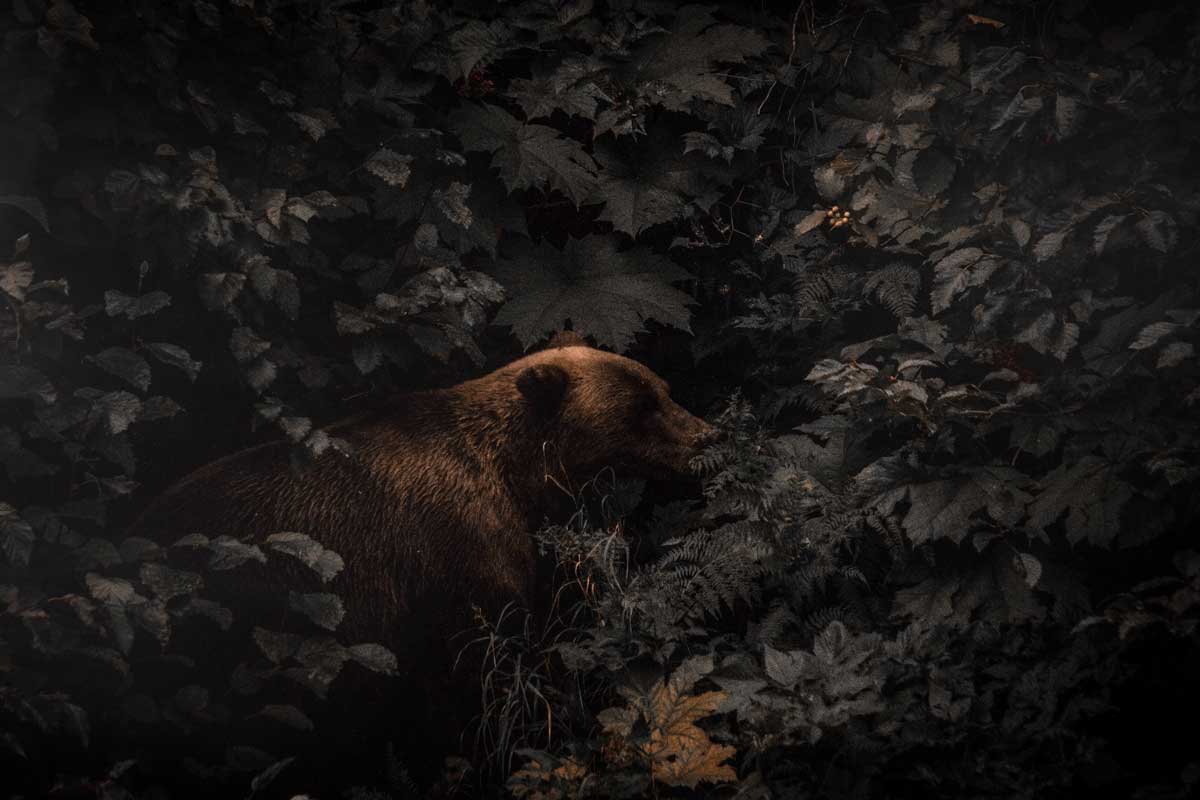 Will bears bother you in a tent?

Learning how to conduct in areas with bears is essential for avoiding close-range encounters with a bear. If you make camp, keep things clean and don’t leave any food or garbage near your tent. This should help you reduce considerably the chances of hearing a bear walking around your tent looking for garbage or improperly stored food. However, if there’s a bear outside your tent and you’re wondering what to do, you should know that:

Considering the facts above, keep calm and keep your bear spray handy to be able to use it in the case of a bear attack. More often than not you’ll avoid conflict with bears and they won’t bother you in your tent. However, considering the fact that bears are dangerous and unpredictable wild animals, you should be prepared to fight back if necessary.

Are bears scared of lights?

Having a flashlight is important when backcountry camping around bears because you can easily investigate a noise made by a wild animal and locate its source and/or check the area for bears. However, there is no evidence that bears are scared of lights or if they have any deterrent effects at all. Actually, as bears are extremely curious animals, there’s a good chance that lights and fires could attract rather than frighten them.

Should you yell at a bear?

Many people don’t know how to react if they see a bear. Unfortunately, the lack of knowledge about the bears and the proper behavior should they see a bear often turns into an instinctive reaction that’s wrong. This wrong response might put their or other people’s lives in danger. Having said that, mildly aggressive acts such as yelling or clapping hands can be particularly effective against black bears. However, showing too much aggression towards black bears can trigger an attack. Grizzly bears are even less likely to tolerate potential aggressors. And yelling at them can definitely make grizzly bears show aggression towards you especially if they feel threatened. Thus, as a rule of thumb, don’t normally act aggressively against bears unless they exhibit predatory behavior. In most cases, it is much better to stay calm and talk to the bear in a normal voice. 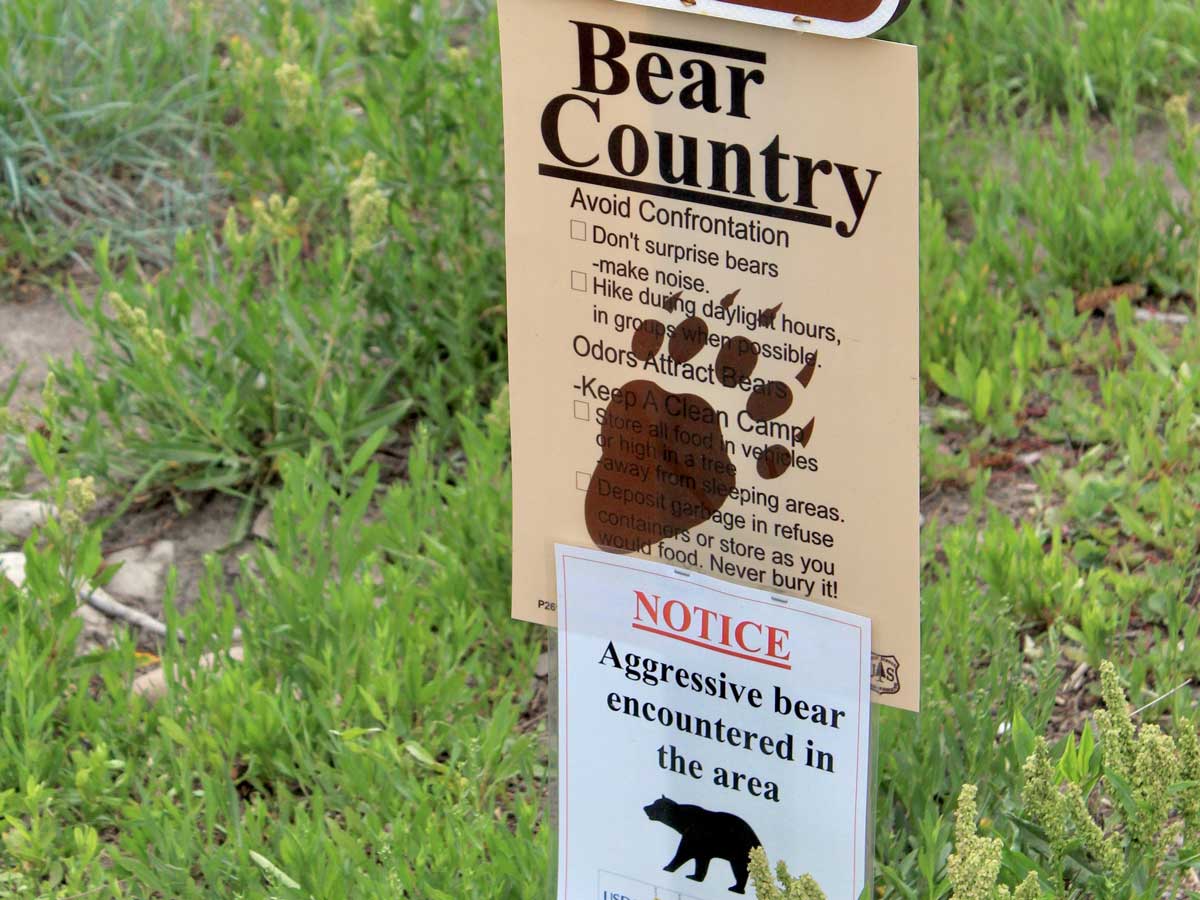 Should you play dead with a bear?

Many dangerous situations occur when a brown bear is suddenly confronted at close range. Even then, the chances are that the grizzly bear would flee without aggressive action. However, when the bear sees you as an aggressor and acts defensively, playing dead might be one of your best options. Especially against grizzly bears, active resistance – fighting, screaming, etc. can lead to a ferocious attack resulting in more severe injuries. Normal defensive behavior is when the bear:

Remember that you should never play dead before you are attacked. Wait for the brown bear to be very close and make (or is about to make) contact. Then, hit the ground and lie down either on your stomach covering the back of your neck with your hands for protection or in a sided fetal position. Try to stay still until the bear feels that you’re not a threat. At that point, the bear usually ends the attack and you’ll have to wait a few minutes remaining motionless to make sure that it’s left. Rarely, a grizzly bear can return and renew its attack. Playing dead again is probably your best option. However, if the attack progresses and you sense that the bear isn’t acting defensive, you need to fight back. Do it as aggressively as you can as you’re fighting for your life. 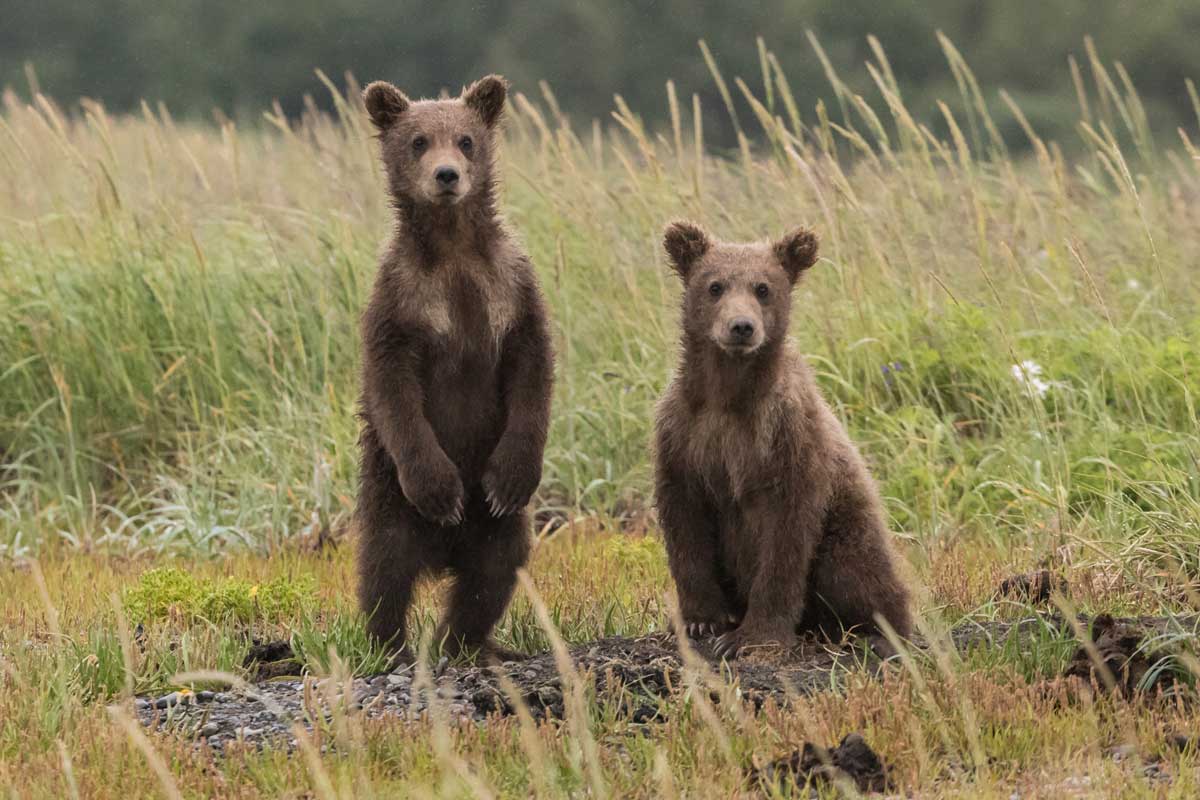 Note that there’s a huge difference between a grizzly mother bear that’s defending her cubs, bear that feels threatened and acts defensively, and a bear that sees you as potential food. Playing dead with a black or a grizzly bear that’s behaving as a predatory bear is no option. The right response to a predatory attack is only one – to fight back focusing on the bear’s face or muzzle using any available weapon. Black bears are much more often involved in predatory attacks against humans than grizzly bears. Meanwhile, black bears are much less often involved in defensive attacks. This means that playing dead with a black bear should be avoided.

Never play dead with a black or brown bear if the bear:

A common misunderstanding is that both backpacking and camping in bear country are unsafe because bears are animals with a fierce nature. In reality, your worst enemy in bear territory is your own poor decision making. In fact, most injuries and deaths as a result of a bear attack on the trail are primarily due to insufficient knowledge about bears and poor decision making by the backpackers themselves. The key to keeping the level of risk under control is simple: just make good decisions. Then it’s much more likely to enjoy your stay in bear country and return home safely.

Tips for Camping in Bear Country

Tips for Hiking in Bear Country

Top 10 National Parks in the US 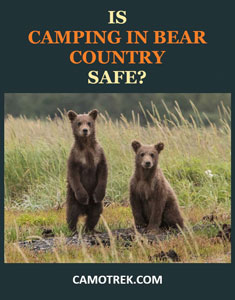 Camotrek.com is a participant in the Amazon Services LLC Associates Program, an affiliate advertising program designed to provide a means for us to receive commission income by linking to Amazon.com and affiliated sites. Amazon and the Amazon logo are trademarks of Amazon.com, Inc. or its affiliates.