The Predecessor of Modern Camouflage

The first camouflage was used by hunters to disguise themselves from their prey and could take the form of foliage or mud smeared over their bodies, to hide their scent as well as their appearance.

Hunters today continue to use camouflage, wearing both camouflage pattern textiles and the more traditional ghillie suit, which was devised by Scottish gamekeepers and made up of hundreds of strips of cloth attached to netting. The ghillie suit is a favorite with army snipers too because effective textile designs of overlaying leaves, twigs, and bark may create a three-dimensional illusion of foliage.

Camouflage and its uses in the military – the beginning

However, camo pattern uniforms were not particularly popular for military use until modern times. For centuries army uniform marked an individual as a soldier: its colors, or the symbols worn upon it, helped demonstrate the wearer’s allegiance. As time went on its functional aspect became increasingly important, and uniforms that had once been intended to impress or even terrify were designed to aid concealment.

When the first permanent army was raised in 1645, red became the mainstay color. At that time, every European army adopted certain colors as their national colors; the French soldiers started out with white tunics but by the time of the Napoleonic Wars were dressed in dark blue, the Russians wore green and the British wore red. Thus the British foot soldier came to be referred to as Redcoat because of the color of the military uniforms formerly worn by the majority of regiments. 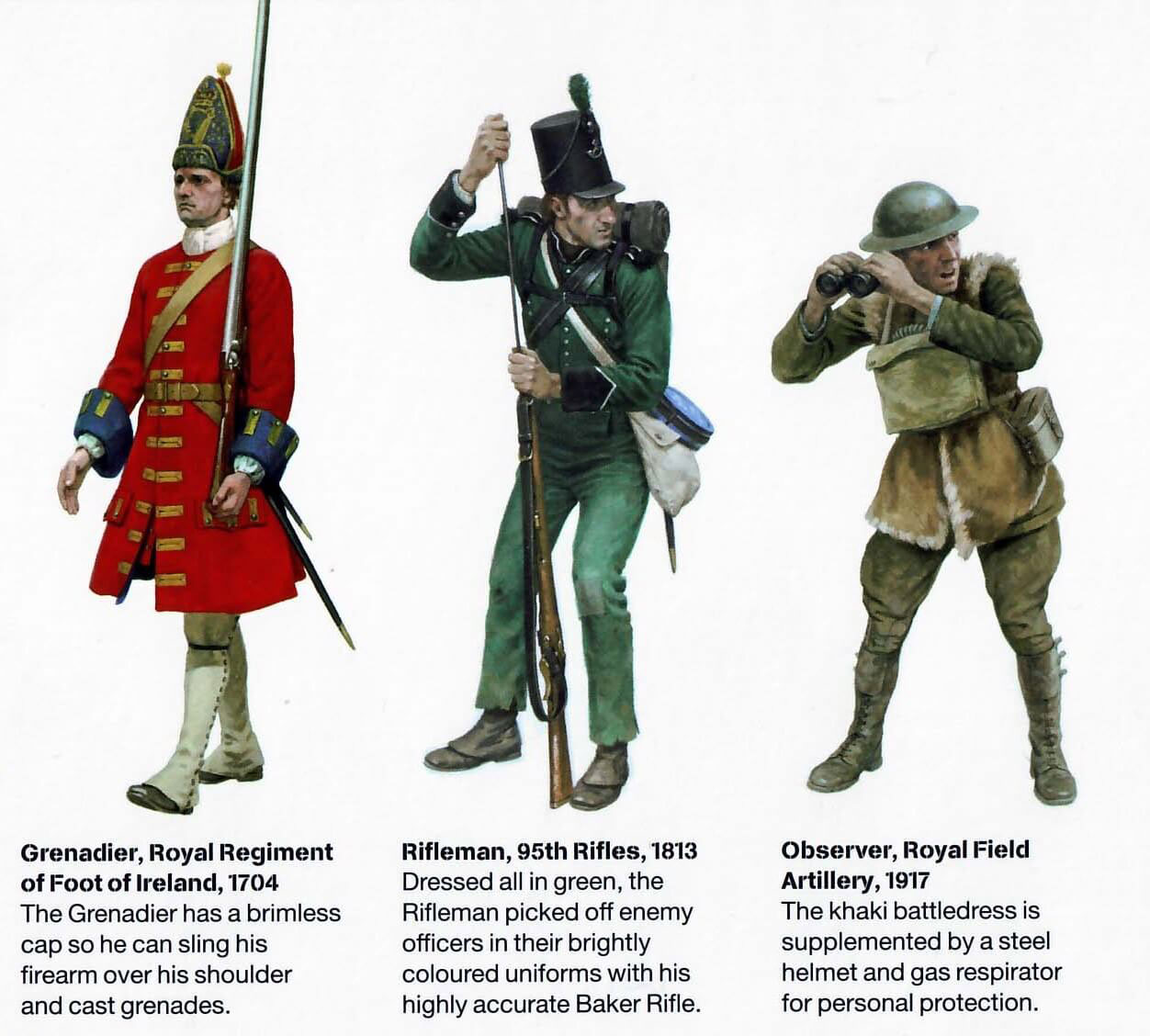 Although the term “redcoats” is familiar throughout much of the former British Empire, this color wasn’t exclusive to the British Army. For example, particular units in the German, French, Austro-Hungarian, Russian, Bulgarian and Romanian armies retained red uniforms until the onset of the First World War in 1914.
The extensive use of this color by British, Indian and other imperial soldiers over a period of nearly three hundred years, however, made the red uniform a symbol of the British imperial power.

The Corps of Guides, a combination of cavalry and infantry raised by Henry Lumsden in Punjab in 1846, was the first unit in the British Army to wear the predecessor of modern camo – khaki. Khaki is a Hindi word meaning dustcolored, derived from the Persian khak for soil or dirt. Lumdsen equipped his native soldiers with loose-fitting trousers and jackets based on the local kurta, which he had dyed with river mud that produced more of a gray, rather than brown, color. Major William Hodson, second-in-command of the Corps of Guides realized its camouflage value when he said the khaki uniforms made his soldiers “invisible in a land of dust”. Just a decade later, the British abolished the use of khaki color uniforms only to vindicate them in 1868. While khaki made a return in India, British soldiers serving in the Zulu War (1879), in the First Anglo-Boer War (1880-1881) and the First Sudan Campaign (1882), retained their scarlet uniforms. However, by the end of the 19th century, the “red coat” was replaced by khaki. Note that it was commonplace for troops to stain their white uniforms and helmets with any appropriate substance in order to break up the white and therefore provide some camouflage. A variety of materials, including mud, tea, coffee, tobacco juice, and even curry powder were used. However, there was a serious problem because the color made that way was not consistent. Over the years numerous attempts were made to formulate a dye that would provide a consistent khaki color that wouldn’t fade or run. These attempts failed with the uniforms varying greatly in color after only a few weeks or months of exposure to the weather.

The problem was “solved” when a fast-dye was patented, which produced a consistent yellowish-brown color that would be retained over a prolonged period. 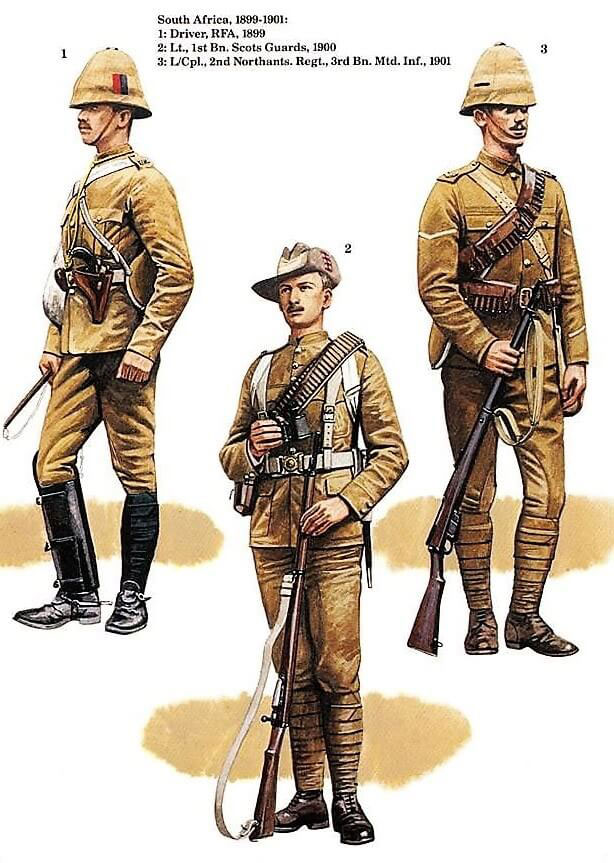 In 1896 khaki was adopted into the British Army for all overseas service; it was worn at the battle of Omdurman (1898) in Sudan and during the Second Boer War (1899-1902). In 1902 it became the official uniform color for home service too, making the scarlet jacket purely ceremonial dress. In the same year, khaki also became the official combat outfit for the US Army.

Experiments with camouflage patterns painted on coastal gun emplacements were carried out during the late Victorian era, both in the UK and abroad. A War Office report of 1886 on defenses in Malta said that “if the concrete was colored and the guns distempered, the battery would be hard to make out”. Another report described modern coastal forts in the UK “painted in broad reds, greens, and yellows”. However, the importance of military camouflage started to crystallize during World War One.

Camouflage was not considered for military use until modern times. The beginning was difficult and controversial, however, gradually camo pattern uniforms (including the use of modern camo predecessors such as khaki), and camouflage use, in general, have become standard for military use, not an exception.

Camotrek.com is a participant in the Amazon Services LLC Associates Program, an affiliate advertising program designed to provide a means for us to receive commission income by linking to Amazon.com and affiliated sites. Amazon and the Amazon logo are trademarks of Amazon.com, Inc. or its affiliates.

We use cookies to make your experience better. If you continue to use this site we will assume that you are happy with it.OKPrivacy policy