Hiking, backpacking, and exploring natural parks are among the most popular hobbies in the United States in recent years. Today (as of March 2019), there are 61 national parks in the National Park System. These amazing places in the great outdoors are perfect for an affordable vacation among beautiful natural landscapes, breathtaking sceneries, cultural and historical landmarks. 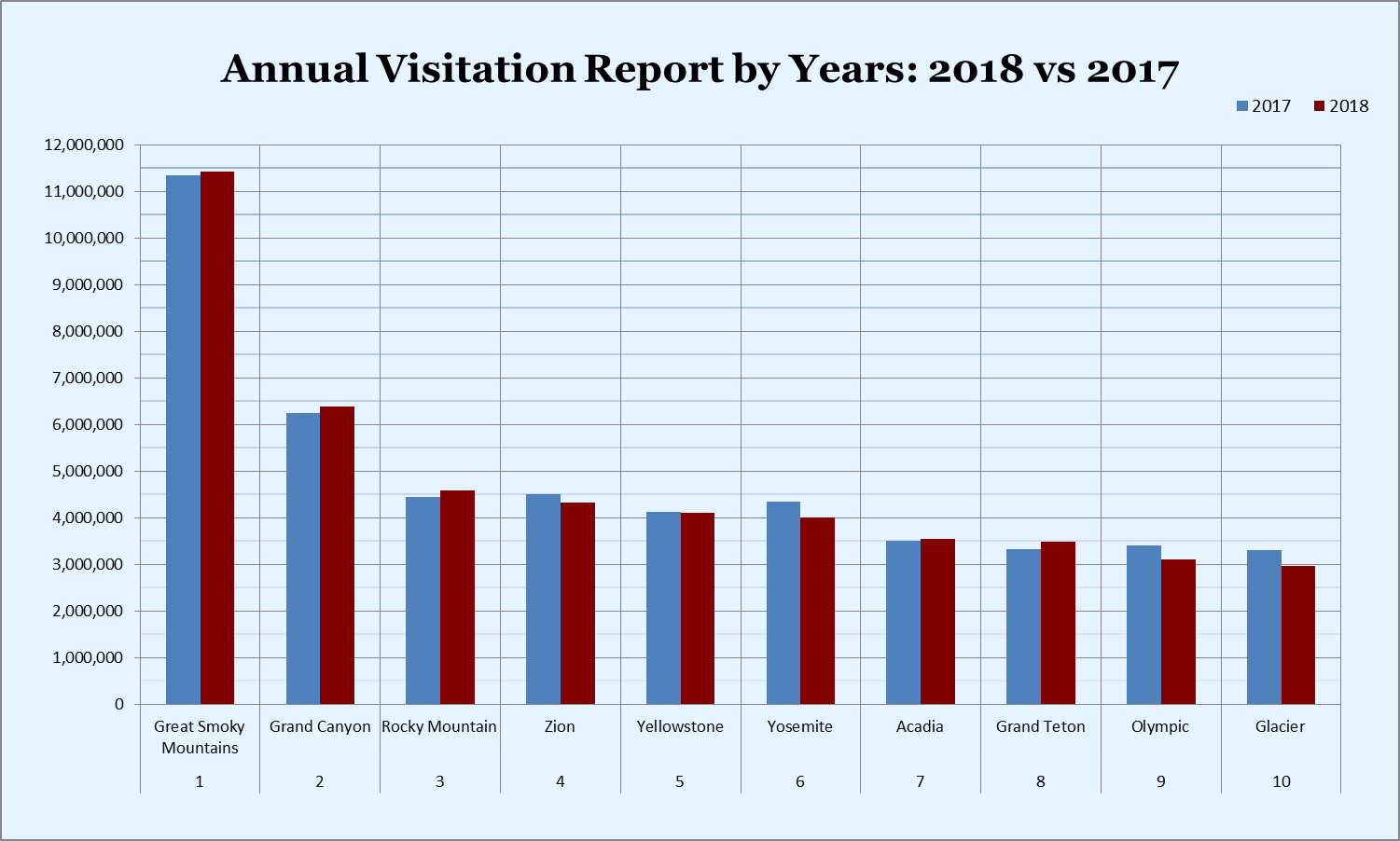 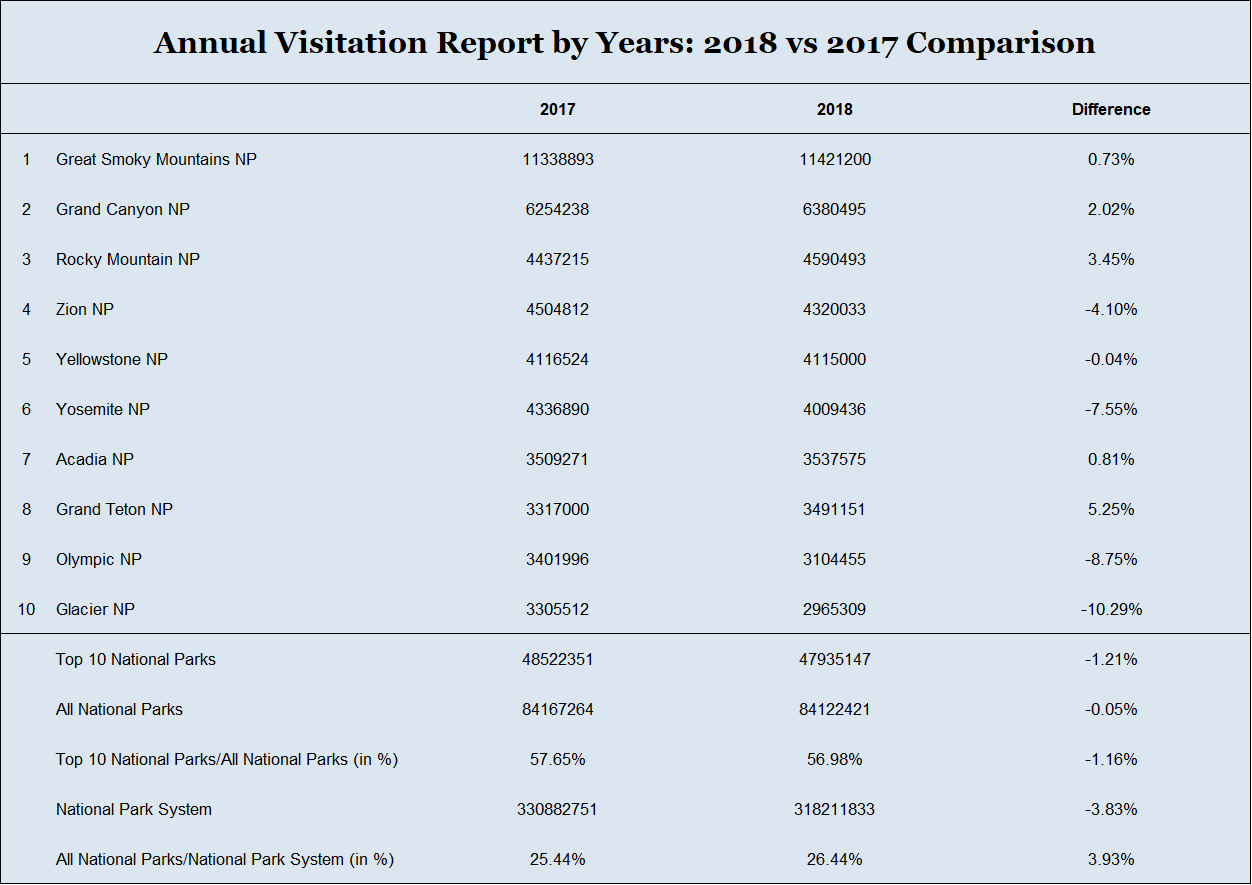 Most Visited National Parks in the US

America’s top 10 national parks with the most recreational visits in 2018 are: 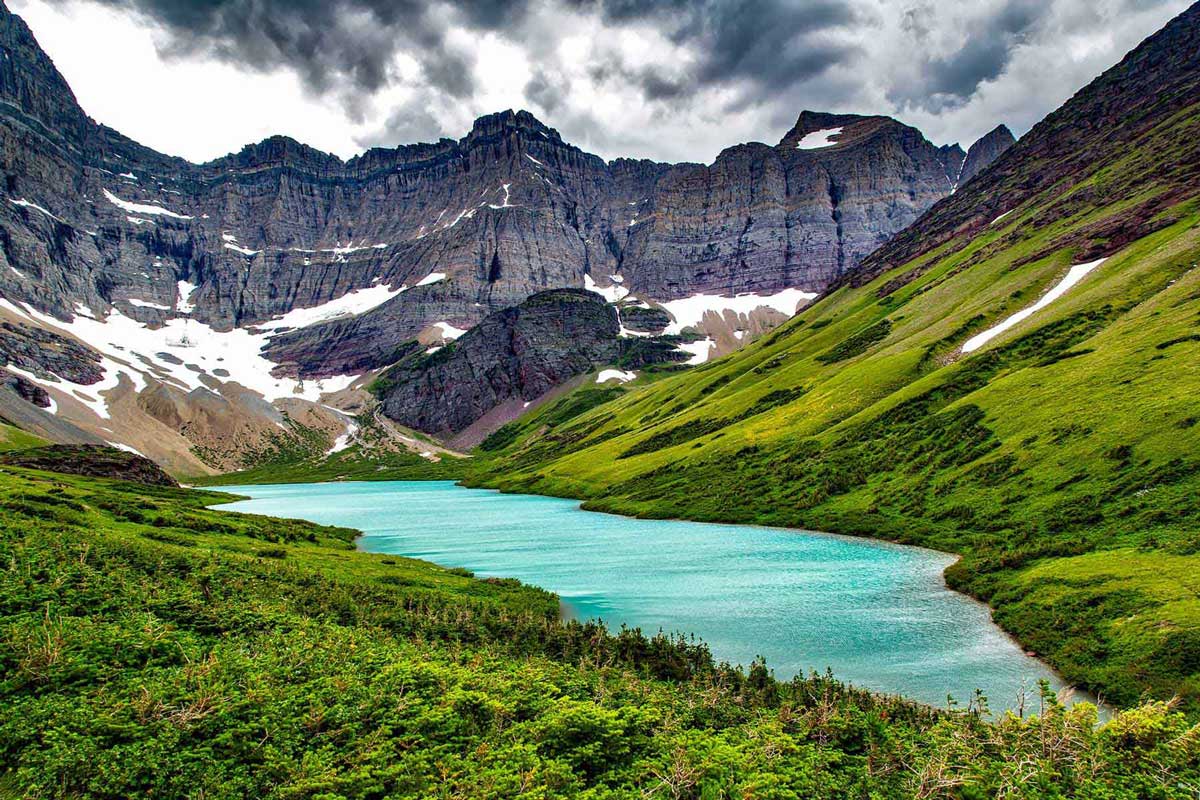 Glacier National Park welcomed 2 965 309 visitors in 2018 making it the tenth most visited national park in the USA for this year. Although impressive, this number means that the annual visitations decreased by more than 10% between 2017 and 2018.

Glacier National Park is an astounding place where the earth’s forces have left their imprints on the landscape with rugged mountains, red pinnacles, spectacular glacier-carved basins, and waterfalls. A perfect place for those seeking wilderness and solitude, the national park is located in northwestern Montana and covers over a million acres.

In 1910, when Glacier was established, it had over 100 glaciers. However, during the course of the last century (and especially since 1966) and thanks mainly to climate change, this number has shrunk to 26 active glaciers today. Moreover, every glacier in the park is melting at an alarming rate affecting the entire ecosystem. Glacier preserves some of the nation’s wildest country. 71 species of mammals (including large and/or animals such as bears, wolves, wolverines, lynx, mountain lions, elk, mountain goats, and bighorn sheep), 276 species of birds (among them ospreys, bald and golden eagles, harlequin ducks, and northern hawk owls), native and invasive species of fish, as well as several species of reptiles and amphibians call Glacier home. The flora consists of 30 species that are endemic to the region as well as more than 1100 other species of plants.

Over 1180 km (734 miles) of trails make the Glacier National Park a hiker’s paradise. It is a place for adventurous visitors who are not afraid to explore the idyllic backcountry havens, impressive mountains, and century forests with huge hemlocks and western red cedars. White-water river rafting, horseback riding, fishing, kayaking, and boating are among the most popular activities in Glacier National Park. 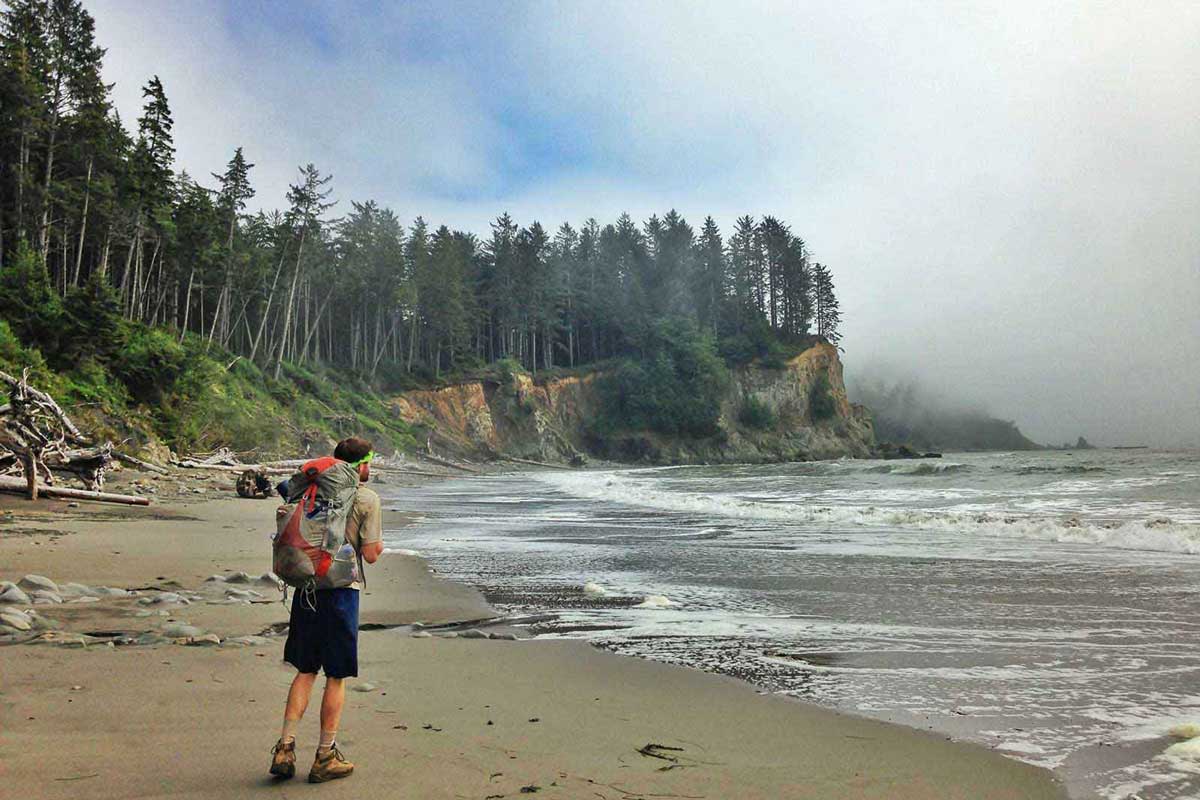 Olympic National Park welcomed 3 104 455 visitors in 2018, which made it the ninth most visited national park in the country. Just a year before that, it attracted more than 3.4 million visitors. This means that there was a 9% decrease in recreational visits between 2017 and 2018.

Famous for the diversity of ecosystems that coexist on the territory of the national park (thanks to the different features, climates, and conditions, including mountains, rivers, lakes, forests, and more than 70 miles of wild coastline), Olympic is located in northwestern Washington and covers nearly a million acres (922 650 to be exact).

Olympic national park has more than 800 km (500 miles) of hiking trails that vary from easy to challenging. Changing weather is typical for the park so take this into consideration when planning your hike. Keep in mind that, 95% of the national park is designated as wilderness. Thus avoid off-trail hiking and pack out all trash to preserve its wildness and character for future generations. 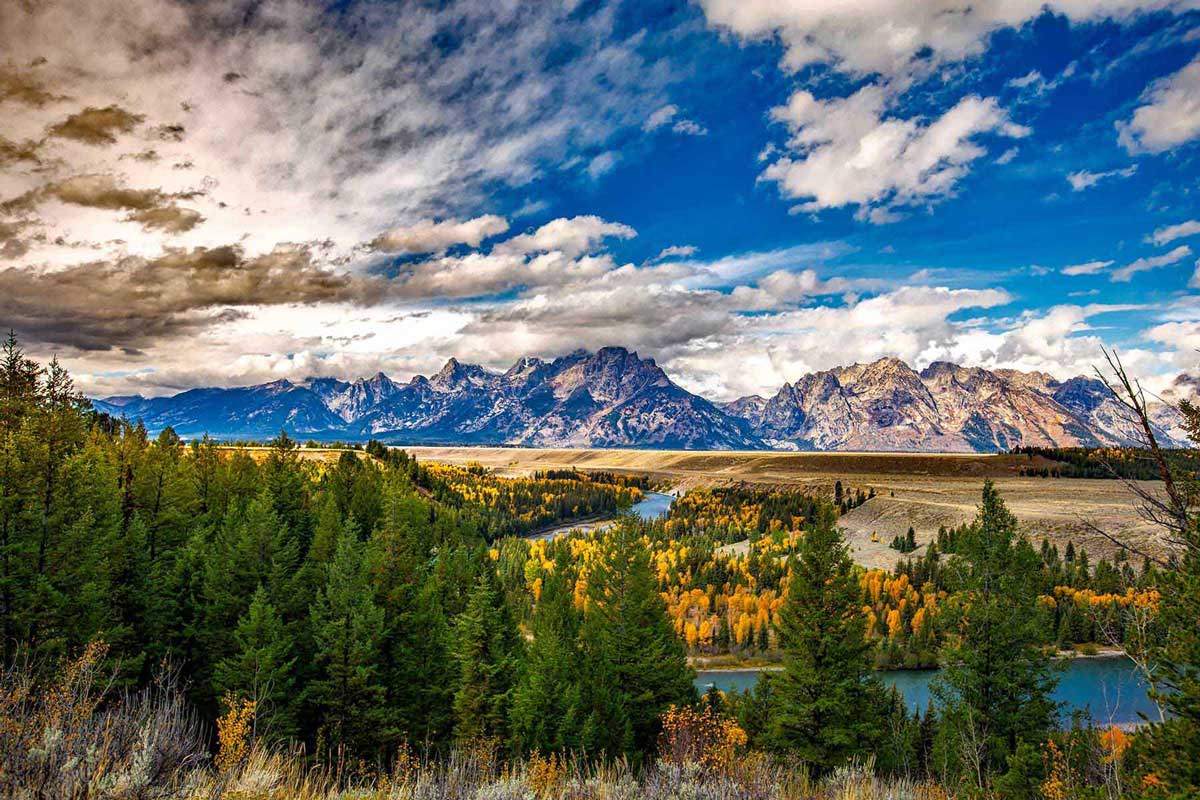 Grand Teton National Park was the eighth most visited national park in the United States last year with 3 491 151 visitors. The increase in the annual recreational visits for the 2017-2018 period exceeded 5% as the park attracted more than 3 317 000 visitors in 2017.

Located in the state of Wyoming, the national park encompasses 310 000 acres of diverse landscapes. The combination of piedmont lakes, glacial canyons, rock, snow, and ice make the national park perfect for hiking and camping, climbing and mountaineering, skiing and snowboarding. The 320 km (200 miles) of trails attract thousands of hikers and backpackers to the Grand Teton National Park. The Tetons are bug-free year-round and offer great views and scenic hikes through green meadows, diverse woodlands, and beautiful lakeshores. The hiking season runs roughly from June to October depending on elevation and weather conditions. Avoid hiking alone and night hiking, if possible, to avoid dangerous encounters with bears and other large animals. 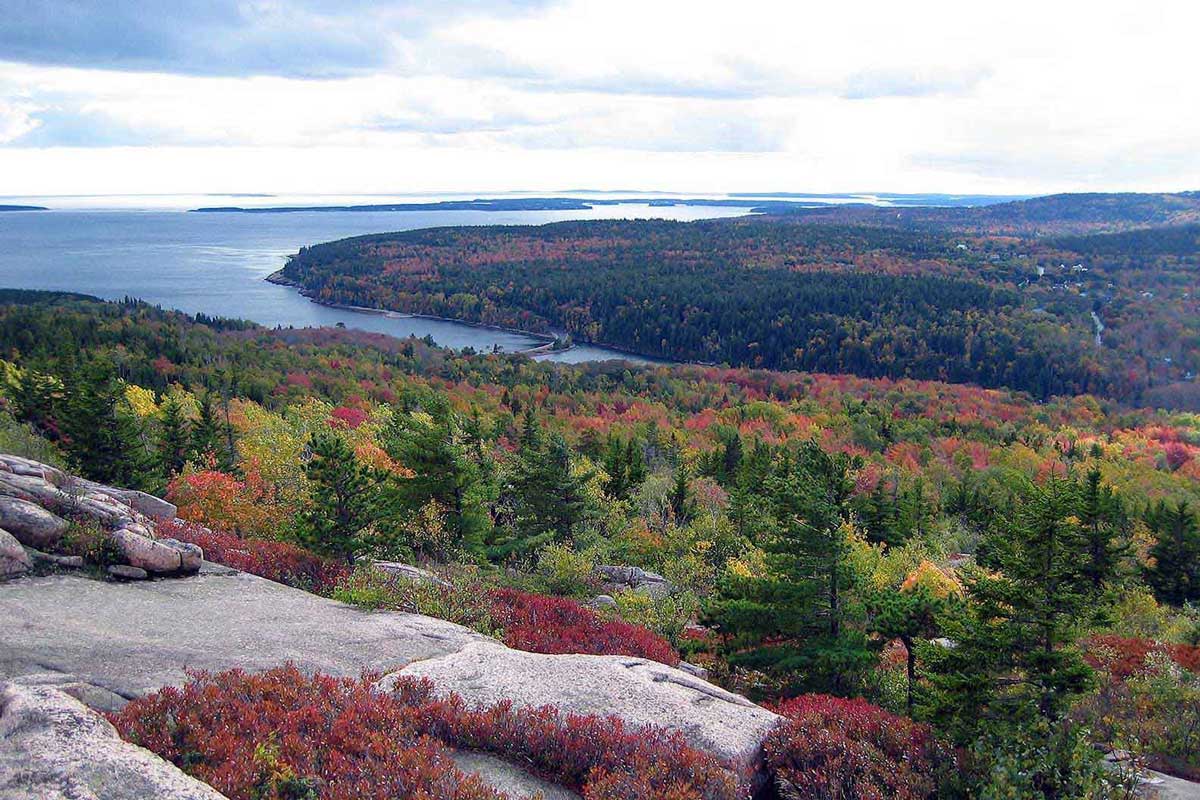 The seventh most popular national park, Acadia, welcomed approximately 3.54 million visitors in 2018, 1% more than the number of people who had visited it in 2017 when it welcomed 3.5 million visitors.

Located in Maine, Acadia National Park is the only national park in the northeastern United States. It encompasses around 49 000 acres. Due to the mountains, ocean coastline, woodlands, and wetlands, Acadia offers landscape and biological diversity.

More than 200 km (125 miles) of trails that vary from easy to rugged can be hiked in Acadia. Plenty of other activities ranging from swimming, boating, and fishing to rock climbing, snowshoeing, and skiing can also be practiced on the territory of the national park depending on the season and weather conditions. 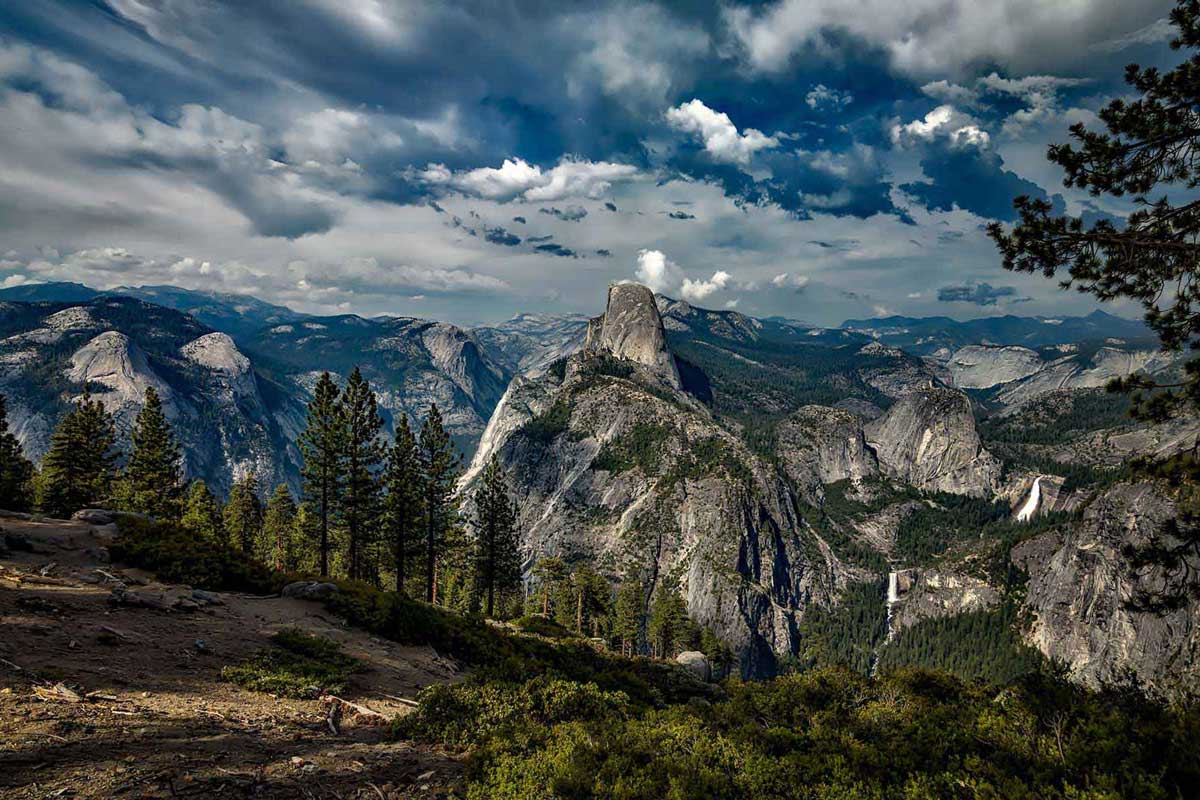 The national park is located in the Western Sierra Nevada of Central California and covers 747 956Êacres. Yosemite was the first federal land to be set aside as “any” kind of park in 1864. Famous for its dashing waterfalls, clear streams, and steep granite cliffs, the national park is considered by many one of the most spectacular places in the US.

More than 1300 km (800 miles) of trails give you a chance to take a hike and experience Yosemite just like John Muir and the other pioneers did so more than a century ago. Keep in mind that like Olympia, 95% of Yosemite National park is designated as wilderness. Thus stay on trails as off-trail hiking is both dangerous and illegal. Camping, biking, boating, fishing, and rock climbing (the national park has an elevation range of nearly 3500m) are also extremely popular. 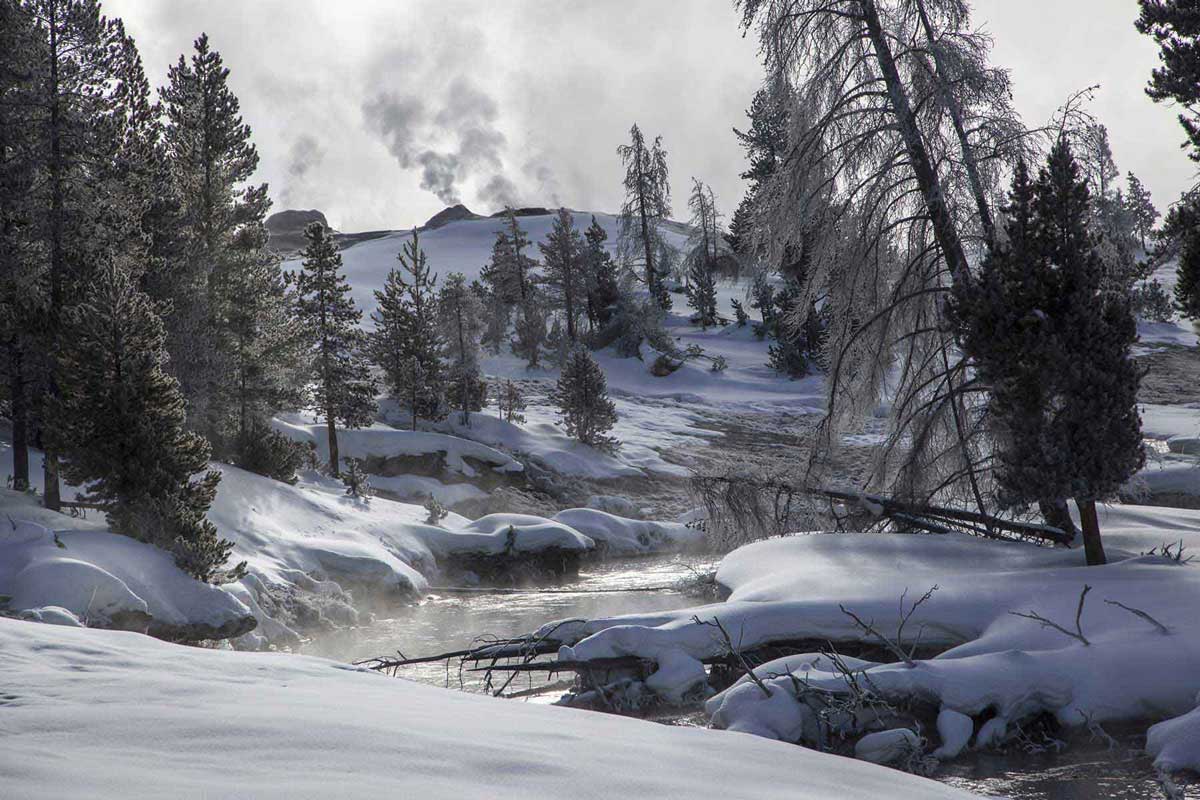 The national park is located in three different states (Wyoming, Montana, and Idaho), with 96% of its territory in Wyoming. Yellowstone encompasses 2.2 million acres, which makes it one of the biggest and most diverse national parks in the US. The park is famous for the diverse terrain and the combination of geothermal fireworks, pristine glacial lakes, jagged mountains, open meadows, and deep canyons. All these have made Yellowstone a symbol of the great outdoors and a preferred destination for millions of people.

1770 km (1100 miles) of hiking trails are available for day hikes and overnight backpacking trips on the territory of the park. Except for its vastness and beauty, Yellowstone is famous for its mercurial weather. Thus be prepared for the possibility of extreme conditions and four seasons in a single day. Hiking in winter conditions is typical for Yellowstone National Park (at least for 9 months each year). Also, be prepared for afternoon thundershowers that make hiking in the rain a good possibility.

With more than 4.32 million visitors, Zion National Park was the fourth most visited national park in the US in 2018. It attracted more than 4.5 million visitors in 2017 or there was a decrease of around 180 000 recreational visits between 2018 and 2017.

Zion is the most heavily visited national park in Utah and is located in the southwestern part of the state. It covers 148 000 acres with 1500 meters of elevation change (from 1117m to 2660m). Zion is an area of astonishing biological diversity due to the unique geography, the variety of life zones, and the wide range of weather conditions in the national park.

You can explore over 150 km (90 miles) of trails that vary, from paved and flat river strolls to precarious cliff-side scrambles. The array of canyons makes Zion a great place for scrambling, rappelling, climbing and descending. Some of the most popular trails are located in Zion Canyon so beware of the hiking hazards such as flash floods and summer thunderstorms. Keep in mind that the park is packed from April from October. If you enjoy solitude, it is a good idea to visit the national park at some other time of the year.

Rocky Mountain National Park is among the parks that saw record visits in 2018. More than 4.59 million people flocked in 2018 making Rocky Mountain National Park the third most popular national park in the States last year. This number exceeds the 4.44 million visitors (in 2017) that visited the national park famous for its scenic grandeur, watchable wildlife, and recreational opportunities.

Established more than 100 years ago, Rocky Mountain National Park is located in north-central Colorado. It occupies 265 000 acres of spectacular mountain environments ranging from 2396m to 4346m. Sixty peaks over 3600 meters high, glacial cirques, sparkling lakes, and picturesque mountain views attract crowds of people from all over the world.

There are over 480 km (300 miles) of trails available for hiking and backpacking. The national park has a lot to offer to both those who would like to enjoy the beauty of the park in the warm months and to those who would prefer to relish the many advantages of winter hiking. Beware of the changing weather and the potential for avalanches. Always check out the weather forecast as well as the avalanche forecast when planning your hike. Additionally, if you decide to go for a high-altitude backpacking trip, learn more about the dangers associated with hiking at altitude. 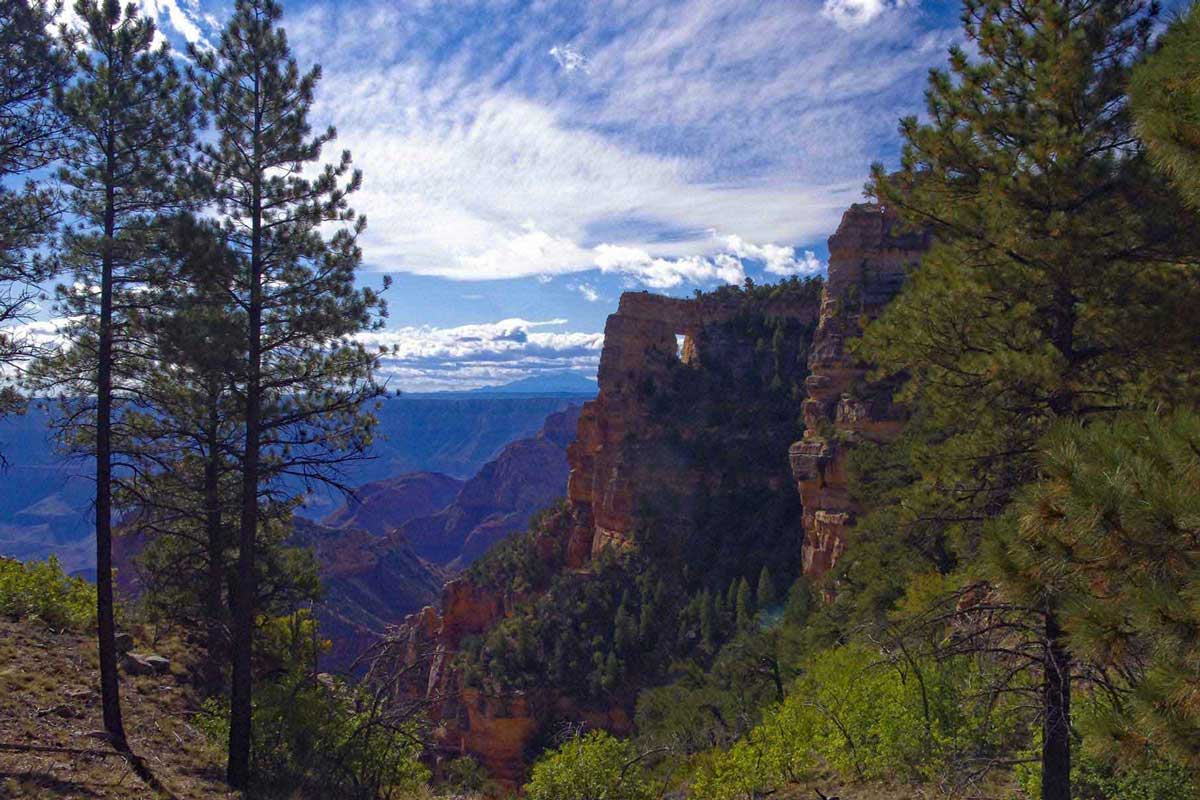 Grand Canyon National Park saw record visits in 2018. With nearly 6.38 million visitors, it was the second most popular national park in the US last year. The park attracted more than 6.25 million visitors in 2017, which means a 2.02% increase in the annual recreational visits between 2017 and 2018.

One of the most popular tourist destinations in the USA, Grand Canyon National Park occupies around 1.22 million acres in northern Arizona. It’s probably one of the most famous and scenic national parks in the world. The immense size of the canyon (446 km length, up to 29 km width, 1.6 km depth) overwhelms millions of people from around the world each year.

Hiking the Grand Canyon is markedly different from hiking elsewhere. The rough terrain, as well as the hefty elevation changes, the desert environment, and unique climate, make hiking especially challenging. Thus, careful preparation for your day hikes as well as for your multi-day trips into the canyon is recommended. Winter hiking is spectacular, however, keep in mind that only the South Rim remains open. In addition, you’ll need appropriate hiking boots and a pair of crampons. 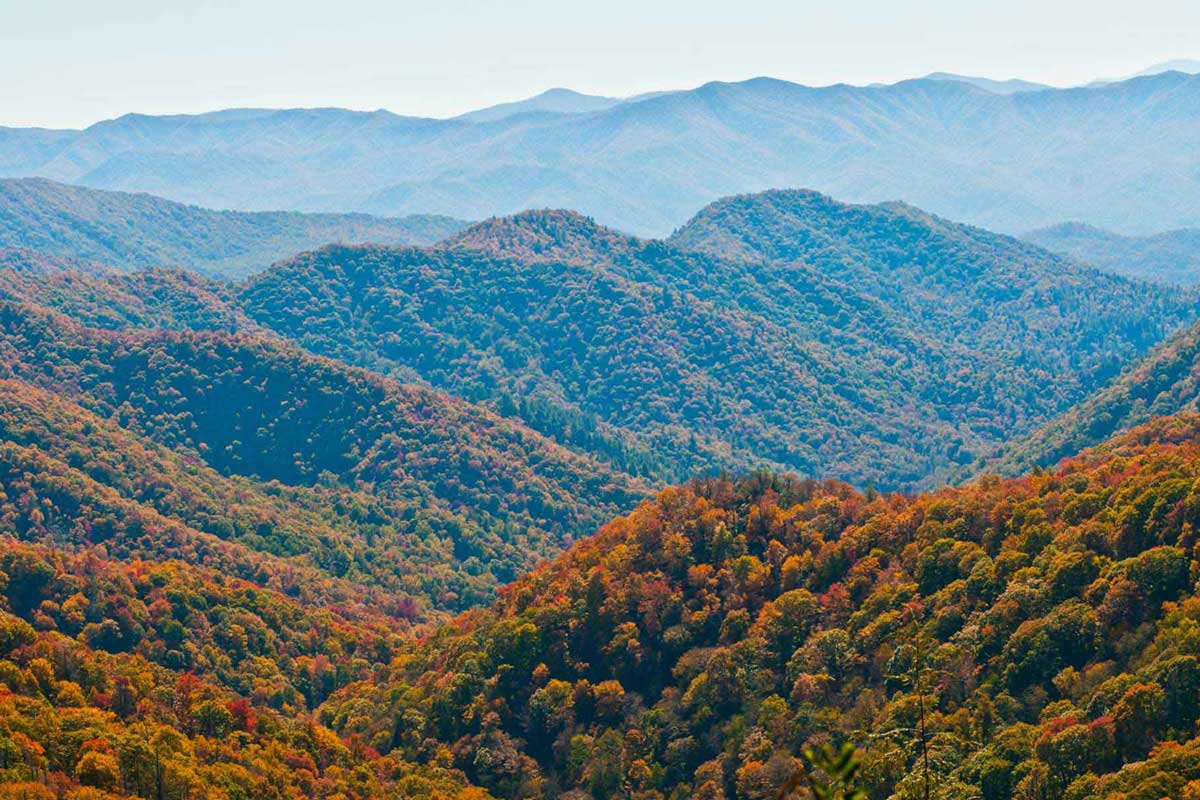 Just like in 2017, Great Smoky Mountains was the most visited national park in the USA in 2018. With 11.42 million visitors in 2018, this pristine natural area registered an increase of less than 1% in comparison with the 11.34 million people that were welcomed in the park in 2017.

Great Smoky Mountains National park is located along the Tennessee-North Carolina line and covers 522 427 acres. The national park encompasses mountains, heavy hardwood forests, rushing rivers, pristine streams, and abundant waterfalls. Though the Great Smoky Mountains (also called the Salamander Capital of the World) are just a small part of the Appalachian Mountain Chain, they are home to an incredible diversity of species.

There are 1370 km (850 miles) of trails that crisscross the landscape. Hiking and backpacking are preferred choice for many visitors of the park and it can’t be different when 113 km (70 miles) of the world-famous Appalachian Trail are on the territory of the park. The trails stay open year-round, however, the forces of nature determine trail conditions. Keep this in mind when planning your hiking or backpacking trip. Also, take into account that in the Smoky Mountains most people travel less than 2.5 km (1.5 miles) per hour.

Visiting one or more of the top 10 most popular national parks in the US during your next vacation can be a great reason to start hiking. Walking through beautiful landscapes and magnificent sceneries is an excellent opportunity to relax in nature. It’s a great way to find peace, regain your balance, and recharge your batteries amid impressive mountains and old-grown forests.

Infographic: Top 10 Most Popular National Parks in the USA in 2018

Scroll back to top